When Jeremy was a young child in the 1980s, in rural, conservative Michigan, his father disclosed to his family that he was gay, and, several years later, was diagnosed with HIV. He was given just a year to live, but he was able to participate in early clinical trials for HIV treatment. Dan Stoepker lived 20 years, until Jeremy was 27. Dan died of complications from AIDs — but he had made a mark advocating for gay and lesbian rights.

“Being told at 7 that your dad’s going to die, then being given hope–those doctors who kept my dad alive all those years – they were my childhood heroes,” says Stoepker.

During medical school at Georgetown University in the 1990s, however, he found no particular education or training about the unique health issues impacting the LGBTQ community. HIV and AIDS treatment were handled by specialists – but primary care and sexual health for this demographic was not a focus of education. 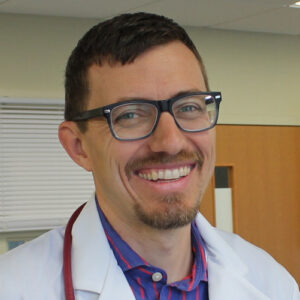 Later, working as a family medicine physician in private practice New York City, Stoepker learned as much as he could about caring for gay, lesbian and transgender patients. Hearing about the struggles of some LGBTQ patients in acquiring access to healthcare from open-minded, compassionate physicians, he established a safe zone for these patients in his medical practice.

Slowly, he began to figure out what it meant to care for LGBTQ patients – not those with HIV or AIDs, who were under the care of specialists – but those living their lives and seeking good primary care. In the course of this work, he found himself coordinating care with his patients’ other specialists.

“There’s nothing different about caring for LGBTQ patients – it’s just good medical care, the same good medical care everyone deserves,” he said. “You listen – non-judgmentally more than you talk — with an open mind, to whatever your patient brings into the room.”

Sometimes, those conversations are about PreP, a daily pill that can prevent a high-risk patient from contracting HIV; sometimes about the recently approved HPV vaccine for adults.

Soon, word got out that Stoepker was a “go-to” doctor in New York City for LGBTQ primary care and sexual health. He offered an option to patients who had encountered primary care Clinicians who were either biased, uninformed or who held negative assumptions or stereotypes about LGBTQ people and “promiscuous” lifestyles. With those physicians, patients told him, physical exams and STD testing would be awkward; conversations about sexuality either uncomfortable or incomplete.

Some LGBTQ patients have experienced outright discrimination. A Harvard T.H. Chan School of Public Health poll showed that one in five LGBT adults have avoided seeking health care due to fear of discrimination; the number is higher for transgender patients.

Stoepker’s medical practice was thriving on New York’s Upper West Side, and he had a great niche caring for LGBTQ patients. But he and his wife, psychiatrist Dr. Tanveer Ahmed, were considering whether city life was sustainable for themselves and their two young children. The urge to leave the city won out, and the family moved to Great Barrington. Stoepker commuted back and forth on the Metro-North commuter train to his city job for months.

But the commute took a toll. After nine months, when a family practice physician job opened up at Community Health Programs Lee Family Practice, near his Berkshire home, he inquired.

And there was something about CHP that appealed to him. CHP, a federally qualified health center, had a mission of caring for all comers – not just the well-to-do. He also knew he would fit in with a Berkshire community where alternative and integrative medicine – his other front-burner interest — are much sought after.

He soon discovered that the Berkshires has a thriving LGBTQ community. Patients quickly found their way to him shortly after his arrival was announced.

“A patient came to me saying he’d had a horrible experience – that a doctor had refused to prescribe PReP,” said Stoepker.

He’s now connecting with other primary care and family medicine Clinicians in the CHP network who share his interest in LGBTQ health.

Stoepker’s schedule is filling quickly by word of mouth. His parallel interest in alternative and non-pharmaceutical approaches to routine health issues is also drawing new patients to his practice.

“I might prescribe zinc lozenges instead of an antibiotic if you have a sore throat,” he said.

Stoepker said he’s impressed with the awareness and advocacy among CHP’s healthcare Clinicians who are committed to providing healthcare for all — including LGBTQ patients. He’s not the only CHP Clinician with interest and expertise in LGBTQ health — but the first to actively promote his special niche.

“CHP’s culture of providing healthcare for all — including the LGBTQ community — is quite impressive,” he said.

Still, he’s looking forward to being an internal and external CHP resource in advocating for LGBTQ patients, their health, and healthcare access.